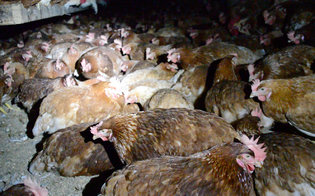 "All The News That's Fit To Eat"

Here’s how the media hierarchy often works: a global authority (say the New York Times) covers a story, the story hits the media radar, and smaller outlets pick it up, paraphrase it, and run it on their own sites.

As a rumor churns through a mill, so goes a story through the mediascape. The whole arrangement is a recipe for potential mutations and distortions. And when the original story had flaws to begin with, and the outlet who picks it up botches things even further, well, that’s how a media that’s supposed to enlighten us sows confusion. Add in the fact that animals cannot write letters to the editor and you an see why this happens a lot.

A textbook case of this process involved the last story I evaluated for The Daily Pitchfork. In it, I take the Times to task for downplaying the obvious message of Direct Action Everywhere’s disturbing footage taken undercover at Petaluma Farms, a northern California Farm that supplies Whole Foods and Organic Valley. Rather than emphasize the clear evidence of animal abuse evident throughout the video, the reporters turned most of the piece over to Petaluma and its advocates to defend the operation, which they did in predictable but completely unsubstantiated ways.

A day later Civil Eats, an award-winning food and agriculture website promoting “critical thought,” summarized the story as part of a generally useful weekly overview of major food-related journalism. Because Civil Eats (understandably) doesn’t define its role as correcting media bias, it made no effort to critique the piece. Nor should it have. The problem, though, came with it’s interpretation of the Times’ article. It writes,

An animal welfare advocacy group called Direct Action Everywhere released a video this week of chickens at Petaluma Farms, which supplies eggs to big name chains and brands like Whole Foods and Organic Valley. While video’s creators argue that the footage is evidence of inhumane treatment, Petaluma Farms hasn’t necessarily done anything to contradict their organic certification. Furthermore, there’s debate between groups like Certified Humane and Animal Welfare Approved regarding what is and isn’t permissible in a large-scale egg operation. What the video reveals, as much as anything, is the lack of consensus about what “humane” treatment of animals really means.

There are many problems packed into this short overview. To say that the video’s creators “argue” that visibly distressed chickens are suffering inhumane treatment is like saying a swimmer argues that the water he swam in is wet. In the next sentence, the summary then notes that nothing in the video technically contradicted the farm’s organic certification. But what is that supposed to imply?  Are organic advocates now invited to breathe a sigh of relief? Of course not. If anything, that terrible fact raises serious questions about how such hellish conditions could have anything to do with the organic label in the first place.

Needless to say, this is not what this summary identified as important to the Times piece. Instead, it ends by noting something truly marginal—that different animal welfare certifying agencies have different standards—presumably as a way to throw the whole question of what’s “humane” into confusion. This final point has the effect of suggesting that perhaps there was in fact nothing wrong with the way those abused chickens were being treated, a message that circles the summary back to the point implied in the Times‘ piece.

But if the certifiers cannot decide on what’s precisely humane on a chicken farm, does this mean journalists are off the hook, too? Civil Eats, at least in this summary, seems to think so.