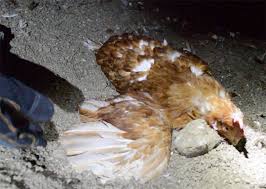 "What Does "Cage-Free" Even Mean?"

The commentary surrounding Direct Action Everywhere’s (DxE) undercover video footage of Petaluma Farms continues. The latest article of note came yesterday from Mother Jones’s Tom Philpott. Philpott’s piece is a strong one. It does a good job highlighting the bogus nature of “cage-free,” a designation that consumers are increasingly coming to realize is pointless. It also takes the luster off the “organic” label, one that consumers too often mistakenly associate with high welfare standards. These are important themes to drive home and the article does it well.

But Philpott’s handling of DxE itself warrants scrutiny. As a vocal defender of pasture-based animal agriculture, Philpott evidently has no problem with slaughtering and eating domesticated animals per se. This position seems to make him suspect of DxE’s aggressively vegan ideology. “The group,” he writes early in the piece, “seems to find all animal farming abhorrent.”

Well, yes. This is true. But it’s hard to see why DxE’s agricultural and dietary philosophy matters in the context of Petaluma Farms. One thus wonders if Philpott, who has produced pastured pork himself, included it for purely strategic purposes. The anti-animal agriculture description drops a hint that suggests these DxE fence-jumpers are, you know, a little nuts. His reference to them as “radical animal-rights activists,” a term he knows carries pejorative connotations, drives home the suggestion with little subtlety.

But what DxE’s members eat has absolutely nothing to do with the footage obtained on Petaluma Farms. Nonetheless, DxE’s stance against all animal agriculture, even the kind Philoptt once practiced, seems to have shaped his coverage.

The clearest evidence of this influence is how Philpott is skeptical of the DxE video in a way he’s not about similar videos obtained by organizations less explicitly opposed to all animal agriculture. Consider the way he handles damning footage obtained last year on a massive industrial pig farm that supplied Tyson’s. He describes the organization that undertook that investigation—Mercy for Animals— as an “animal-welfare” group that exposed the farm’s conditions as “horrific,” marked by “inherent cruelty,” and proof of “spectacular” abuse. He never questions the accuracy of the video.

But when referring to DxE’s video, Philpott implies that the organization—recall those “radical animal-rights activists”—may have dramatized the conditions with hyperbolic rhetoric. He writes, “The narrators use words like ‘stench, ‘ ‘filth,’ and ‘misery’ to describe the scene.” How these terms are any more or less accurate than “horrific” and “inherent cruelty” and “spectacular” isn’t clear. He notes that the investigation happened “under cover of night,” a fact suggesting there was room for possible misinterpretation. At the end of the piece, the most assuring assessment Philpott offers about the DxE video is that it’s “an important but problematic look” at “the gauze of marketing that cloaks the often-harsh realities of large-scale organic farming.”

Fine. But how exactly is it problematic? That question is never answered in this otherwise informative article, leaving readers with a sense that Philpott is much quicker to endorse video footage bashing a factory farm when those who obtained the footage don’t explicitly oppose the kind of animal farming that Philpott supports.

Similarly, readers are also left with a sense that Philpott’s condemnation of animal abuse depends on the level of that farm’s industrialization—Petaluma is no Tysons—and corporate dominance. This bias of Philpott’s might seem small, but to the animals suffering on factory farms, no matter what the operation’s size, it matters little what those who filmed their abuse ate or how industrialized their owners happened to be.