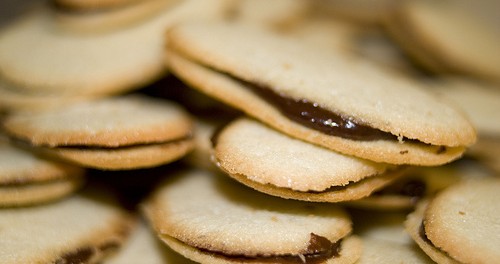 "The Onion Fails To Peel Back The Suffering Caused By Milk"

The Onion, a newspaper that publishes all the satire that’s fit to print, recently ran a hilarious piece about Pepperidge Farm’s famous “Milano” cookies. The story, “Pepperidge Factory Farm Under Fire For Inhumane Treatment Of Milanos” shows cookies crammed in cage-like baskets — a clever mockery of all those horrible factory farm images with animals jammed into impossibly tight spaces.

The story laments “the cramped and unsanitary conditions” afflicting the Milanos. It quotes an “outspoken snack advocate” saying, “What’s most tragic is that many of these weak and vulnerable Milanos are so poorly handled and mistreated that they suffer extensive crumbling and even fractures in their biscuit shells, exposing their delicate chocolate and orange-flavored fillings to the elements.”

But the conceit skirts an irony that even satire shouldn’t ignore. Cookies may not suffer, but the cows producing the milk used in the production of Milanos suffer terribly — and the media rarely notes it.

“Many of us assume that milk is as innocuous a product as an apple,” writes Sherry Colb, Professor of Law and Charles Evans Hughes Scholar at Cornell University School of Law. “We have absorbed this message repeatedly from a very early age.”

A cookie involving suffering? Not so absurd a notion, when you look at how cow’s milk is produced for human consumption.

It starts with a heifer’s forced impregnation. Female cows are strapped to a rack (common slang sometimes refers to the device as a “rape rack”) and inseminated with semen stored in a massive syringe. There are 9 million dairy cows in the US.  Nearly every one of them suffers immensely from the results of this experience. (As this description suggests, the process itself is brutal.)

Left to her own devices after giving birth, a mother cow would feed her calf for nine to twelve months (not to mention play with her calf, teach her calf, protect her calf, and nuzzle her calf). But because the cow’s milk has been reserved for human consumption, the calf is forcibly removed from the mother soon (and sometimes immediately) after birth.

Mother cows have highly developed emotions. They will bellow for days, pace the spot where they gave birth, and stop eating. Then they’ll produce a season’s worth of milk and, once again, be forcibly impregnated.

The mother’s offspring, depending on sex, will face one of two fates. Male dairy calves become “veal calves.” Some of them are slaughtered while only a few days old, others within a few months-–it all depends on the kind of meat desired by the market. Because of this connection, boycotting veal is a pointless gesture if dairy products aren’t boycotted as well. The female dairy calves, for their part, follow in their mothers’ footsteps. They’re fattened and prepared for impregnation at the age of fourteen months.

The normal lifespan of a female cow is around 20 years old. The typical dairy cow, who goes through several rounds of forced impregnations, experiences a drop in milk production after five years. Dairy farmers cannot survive financially unless heifers are producing milk at maximum capacity. As a result, dairy cows not only routinely develop mastitis, but they enter the gates of the abattoir somewhere between the ages of 5-7. The vast majority of the nation’s cheap hamburger meat comes from the bodies of these “spent” dairy cows.

The cycle described here has nothing to do with the scale of operation. It happens on family farms and on factory farms. It’s endemic to the project of forcing one species to produce milk for another. It’s a reality that escapes milk carton narratives and Got Milk billboards. And it’s a reality that’s central to the mass production of Milanos.

And that’s not so funny.