The below spreadsheet converts grazing receipts reported by the BLM for private livestock grazed under the public lands grazing program, allowing a direct head-to-head comparison between the number of wild horses (WH) estimated by the BLM and permitted cattle grazing from 2002-2018 (see column 9). What does the data show? Cattle historically outnumbering WH by a factor of 71:1 (in 2002), 92:1 (2007) and 28:1 (2018). 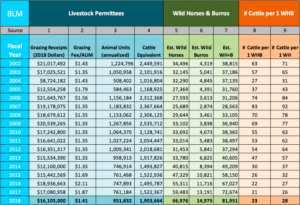 All data BLM. Compiled by dailypitchfork.org.

This isn’t the story the BLM tells the public. In fact, the BLM doesn’t publicly report subsidized livestock numbers.

It hides them, instead spinning a story of overpopulation and overgrazing by wild horses to justify costly WH roundups, removals, sterilization and sale/euthanasia proposals.

The column 9 ratios prove that justification to be false. And the ratios low-ball how many cattle actually compete with WH for water, forage and land, since grazing fees are calculated according to self-reported rancher AUMs and do not reflect underreporting and trespass grazing (like the more than $1 million that Cliven Bundy owed in back grazing fees in 2014). So the actual number of subsidized, privately owned livestock on public lands is likely much much higher. 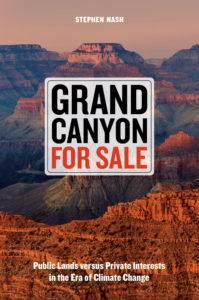 “In this era of American politics, our entire public land heritage is facing the prospect of being put up for sale. I hope this excellent book will awaken all Americans to an unprecedented threat to our parks, national monuments, wilderness areas, wildlife refuges, and ocean sanctuaries.” Bruce Babbitt, Former U.S. Secretary of the Interior

That fuzzes up the picture available to us from BLM data, but it tells a hard-edged story, nonetheless. The distribution of this wealth of public land is skewed, to a staggering degree” (p. 137). As Nash spells out:

The identities of the permittees are sometimes obscured by corporate names, but data provided by the BLM shows that the folks leasing great swaths of public land to graze their cattle and enjoy enormous government subsidies include both people and corporations on Forbes “Billionaires” and “Richest Americans” lists (see p. 138 or click here).

When advocates claim that livestock outnumbers and out-grazes wild horses on public lands, this is not an emotional argument or an opinion. It is an argument based on the above data from the BLM and other government sources — data that the BLM doesn’t make available to the public and media, because it doesn’t want them to know…about the cattle, their owners, the damage they cause, and the massive subsidies they are taking from average Americans.