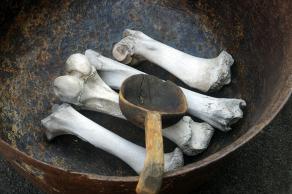 In today’s New York Times “Food” section, Julia Moskin, in an article titled “Bones, Broth, Bliss,” frames her feature piece on bone broth in the context of the much-discussed, meat-centric paleo diet, which she identifies as “the diet du jour.”

This would seem to be a reasonably safe way to contextualize an article on bone soup. But the paleo diet, according to a recent U. S. News ranking, ranks as one of the least popular diets of 2014, coming in at #31 alongside something called the “Dukan Diet.” According to the magazine, “experts took issue with the diet on every measure.”

In misrepresenting the popularity of the Paleo diet, Moskin obscures the fact that what’s really becoming popular with consumers and nutritional authorities are plant-based diets. According to the U. S. News study, the Ornish diet, the flexitarian diet, the Mayo Clinic Diet, and the Mediterranean diet—all of which place heavy emphasis on a diversity of plants and grains and eschew meat high in saturated fats—ranked in the top ten.

In addition to mischaracterizing the paleo diet’s popularity, Moskin—who admits that “there are few reliable studies on the medicinal effects of broth”—also plays fast and loose with the health claims underscoring paleo-related diets.

Throughout the article she quotes or references chefs and cookbook authors who espouse the health benefits of eating paleo. The only actual scientific reference made to support these self-serving claims comes from the author of a book called Nourishing Broth, who says, “When a recipe has that much tradition behind it, I believe the science is there too.” A 12th century physician is also quoted attesting to the medicinal benefits of this idea.

Making matters worse, the author of the broth book, Sally Fallon Morell, heads the Weston A. Price Foundation. This is a highly controversial organization that advocates eating saturated fats and cholesterol from “traditional foods” as a means to optimize health.

The foundation offers no hard evidence to back any of the long term health claims of the paleo diet. Still, this does not prevent Moskin from writing, “the foundation has done analysis that shows [bone broth] may provide benefits inflammatory diseases, digestive problems, and even dopamine levels.”

Moskin ends the article with an anecdotal story about a woman who “drank a jelly glass of chicken broth every day” and lived to be 106 years old. The last line of the piece quotes her grandson calling that broth “her fountain of youth.” Again, there is not a single reference in the article to hard nutritional evidence supporting the author’s repeated insinuation that the paleo diet is a healthy diet.

What’s regrettable about this blatant misrepresentation of a fringe diet is that Moskin’s piece has some interesting historical and anthropological asides that she otherwise might have developed. Readers would have been much better served learning more about the culinary distinctions between broth and stock, or about the ancient use of “fire-heated rocks” dropped in animal guts to make soup, than to be subjected to a bunch of shady health claims by self-interested advocates who think humans should eat like cavemen.