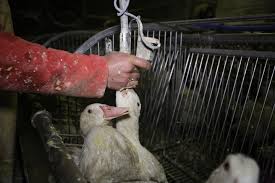 Wyatt Williams’ recent piece in Eater centers on a south Georgia farmer’s ethically fraught decision to raise foie gras. Williams—who told me in a phone conversation that “we can best understand farming on a farm-to-farm basis”—spends a lot of his piece describing the physical texture of Grassroots Farms: an operation hewn of “scrap wood and sweat.” But he also explores the emotional texture of its owner, Brandon Chonko, a newbie farmer who wears Crocs and, it turns out, isn’t exactly thrilled with the idea of force feeding geese—gavage, as it’s called.

“Why am I doing what I’m doing?,” asks Chonko, who has never even eaten foie gras.

As a rule, articles on non-industrial animal farming typically don’t foreground such a question. The suffering endemic to animal abuse in general—as well as the ethical implications of that suffering— are normally shunted aside by journalists preoccupied with agricultural economics, sustainability or regulation.

But Williams’s article is different. His choice to center his piece on Chonko’s anxiety over what most observers consider to be a special form of animal abuse distinguishes it from the jumble of similarly-themed pieces intent on celebrating do-it-yourself slaughter with rhetorical coronations such as “now I know where my food comes from.” No such sloganeering here.

Although Williams is to be commended for highlighting Chonko’s struggle, he is less successful when it comes to grappling with the deeper ethics of the very issue that he raises. Such clumsiness might be expected—“Im a journalist,” Williams reminded me. Indeed, he’s neither an ethicist nor a philosopher, fields that agricultural writers have no overt responsibility to engage.

Perhaps it is his lack of grounding in animal ethics that explains why, after making it perfectly clear that there are ethical implications when it comes to gavage, Williams quickly dodges those implications by writing,

You may have heard that there is an ongoing conversation in this country about the ethics of foie gras. This is not true. The subject inspires not conversation, but something that more closely resembles two deaf men yelling at one another through a brick wall. Even if they could hear one another, they’re not even in the same room.

It’s a good analogy. But the problem is that there is a conversation—and a very serious one—taking place about the ethics of foie gras, not to mention animal domestication in general. It’s just not heard above the white noise that passes as today’s popular food discourse. A quick Google scholar-scan of what philosophers, ethicists, legal theorists, and even activists have to say about gavage belies any claim that no serious discussions of foie gras are taking place.

Evidently unaware of this literature, Williams makes a different kind of move after raising the ethical stakes, and it proves to be a red herring. Essentially, he wonders about the legitimacy of undercover footage obtained by PETA of Hudson Valley, a popular foie gras producer, writing:

PETA and other animal-rights activists cite their own investigations at Hudson Valley’s facilities, describing ducks with “foot infections, kidney necrosis, spleen damage, bruised and broken bills.” They talk of ducks unable to carry the weight of their bloated, diseased bodies. They talk of abusive farm workers. They even describe ducks trying to cannibalize one another “out of stress.”

It’s perfectly fine to be skeptical of undercover footage. But whatever healthy skepticism Williams intended is compromised by his next claim that:

Yet, Hudson Valley has opened their doors to reporters and cameras from the New York Times, the Village Voice, and others. The portraits relayed by these reporters do not suggest the same kind of despair that PETA claims to have found. “I saw no pain or panic … no quacking or frenzied flapping,” Lawrence Downes wrote in the New York Times, with no descriptions of rampant disease or abuse.

I pushed Williams to assess the value of these sources, particularly because, in the latter case, the farm could have cleaned things up for reporters they knew were visiting. He was doubtful that a farm could easily do that. “A restaurant could, perhaps, change a dish or offer better service for a food critic,” He said. “But it would probably be harder for a farm to hide their fundamental operations from a visiting journalist.”

Williams might have a point there, but the larger concern is that, somehow, the entire ethical meat of the matter gets lost in the war over words between PETA and the New York Times, a battle that Williams eventually declares “essentially impossible” to reconcile. The upshot: the surface of the question of gavage is barely touched. Oh, and the birds, who are spared the funnel, are slaughtered anyway, with pictures to prove it.

As noted, this article is to be commended for not dismissing gavage as innocuous. But Williams’ handling of the ethical implications of jamming tubes into the throats of geese suggests a widespread need for greater media awareness about the fundamental aspects of basic animal ethics. In this repsect, Williams piece is a reminder how those who produce, consume and write about food often lack the proper vocabulary to discuss in moral terms what we do to animals to eat them.