One of the sick birds found in a barn at Diestel’s Jamestown, CA farm, 2015.

The Diestel Turkey Ranch in Sonora, CA is a beautiful place where turkeys are free to roam on tree-shaded green pastures. “HAPPY TURKEYS AHEAD” reads a sign outside the Whole Foods meat supplier’s farm in the foothills of the Sierra.

And that’s what consumers see in promotional brochures and Whole Foods video of Diestel’s Sonora ranch, one of just three suppliers (out of 2100) to earn Whole Foods’ 5+ humane meat rating, the upscale retailer’s coveted top honor.

“There’s not a lot of secrets here,” says Timothy J. Diestel, who along with his wife Joan C. Diestel has been running the ranch since 1980.

But an investigation and report by the animal rights group Direct Action Everywhere (DxE) shows otherwise. A 2013 California Regional Water Quality Control Board report states no commercial turkeys have been raised at the Sonora facility since 2011. According to the report, Diestel’s turkeys come from other facilities. One of those is in nearby Jamestown, whose premises are nothing like what Whole Foods depicts in its “humane turkey” videos. 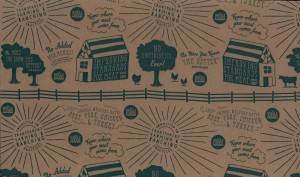 ‘Know where your meat comes from’

Meat from Whole Foods comes wrapped in butcher paper printed with such slogans as “Committed to transparent farming and ranching practices” and “Know where your meat comes from.”

And that’s what Direct Action Everywhere (DxE) set out to document: Where do most of Whole Food’s turkeys come from? How are these turkeys treated during their short, six-month lives?

DxE’s investigation of the Whole Foods supplier broke in the Wall Street Journal’s online edition Monday evening. The nine-month investigation by the Oakland, CA-based group revealed that turkeys live in “horrific conditions” at Diestel’s Jamestown facility, where hundreds of thousands of turkeys are raised each year, including those marketed as “humanely raised” by Whole Foods. You can watch the video footage here:

Diestel’s Jamestown farm has no tree-shaded pastures. Instead, turkeys are crowded into “filthy, noxious barns,” the air “dense with ammonia, particles of feathers and dried fecal particles,” according to a 12-page DxE report, “A Deadly Feast: What you are not told about your Thanksgiving turkey,” of which I was a co-author.

“The endless stream of diseased or dead bodies was overwhelming — like something out of a horror film,” said DxE co-founder and lead investigator, Wayne Hsiung, an attorney and animal rights activist in his mid-30s who co-founded Direct Action Everywhere in January, 2013. DxE, of which I am also a member, has activists in 140 cities and at least 28 countries.

“Every few steps, you would see another dead animal,” Hsiung continued. “Most looked like they had been trampled or pecked to death.” 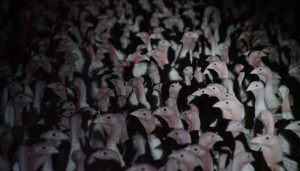 Turkeys crowded into a barn at Diestel’s Jamestown, CA facility, 2015.

‘Their eyes were burning’

The investigation took place from January to September of 2015. DxE investigators including Hsiung spent about 40 hours at the farm, where they found 26 barns, many of which contained “anywhere from 7,000-17,000 birds.”

Video shot by DxE investigators show turkeys crowded into these barns with so little space they are in some cases walking on each other, trampling and killing birds underfoot. The air is thick with dust and other particles; the report says it was also heavy with ammonia and other toxins.

“The air was so bad you could feel its weight on your skin,” said Hsiung. “Some of our investigators had to leave the barn because their eyes were burning.”

Video and photos show dead birds that had clearly been there for days. Diestel’s own documents indicate that in a single barn, hundreds of birds died during a seven-day period (as many as 7% of the birds in that barn).

Investigators also found birds trapped in feces that covered much of the floor, a half-foot deep in some places; with eyes that were swollen shut, swollen nostrils, open wounds and bruises; missing large patches of feathers; inflamed and swollen crops; and stress bars on their feathers — an indication of poor environmental conditions or severe malnutrition.

One barn allowed just 1.4 square feet of space per turkey. Not only does this violate GAP standards, but it’s even less than the industry standard of one square foot for every 7.1 pounds.

The myth of ‘humanely raised’

Whole Foods Market’s promise of humanely raised meat — including “cage-free” eggs and “grass-fed” beef — is supported by a 2015 Gallup Poll showing that the vast majority of Americans believe that farmed animals deserve considerable welfare protection and are willing to pay more for “humanely raised meat, dairy and eggs.”

“We believe the treatment of animals should be guided by an attitude of care, responsibility and respect,” states the company’s website, as part of Whole Foods’ $15-to-$20 million “Values Matter” campaign. Those values onhealthy have been challenged in several Whole Foods exposés, however. Earlier this year, the company was found to be purchasing fish and cheese produced by prison inmates who were paid between 74 cents and $4 per day, Colorado Department of Corrections’ legal services told ABC News.

Whole Foods was also accused by New York’s Department of Consumer Affairs in June, 2015 of routinely overstating “the weight of its pre-packaged products – including meats, dairy and baked goods – resulting in individual customers being overcharged” for items, in some cases by as much as an additional $15.00. The company had previously been found guilty of overcharging customers in California and fined $800,000.

That interdependence extends to its leadership. GAP’s former executive director was once Whole Foods’ Global Meat Coordinator, and she is presently a Whole Foods employee. Whole Foods co-CEO John Mackey sits on GAP’s board.

As DxE’s report notes, “even farms approved by GAP can engage in animal abuse that would be criminal if done to a dog or cat. Practices approved by GAP include castration of baby pigs and calves without anesthesia, nose ringing of sows, which is both physically and psychologically distressing to the pig, and euthanizing turkeys by breaking their necks by hand.”

When asked about DxE’s allegations, a Whole Foods spokesperson provided the following statement: “Within hours of this [DxE] video being brought to our attention, Whole Foods Market sent an expert team to evaluate the conditions of the Diestel farm.  Our team found that the conditions were not as they were portrayed in the video. We go to great lengths to rigorously evaluate all of our suppliers and we maintain the most stringent standards in the industry.  All of the turkey farms we source from, including Diestel, are audited every 15 months by an independent third party in order to capture farm conditions in every season — a requirement for farms to achieve certification in the Global Animal Partnership 5-Step Animal Welfare Rating program.”

“There’s a systemic effort by large corporations to disguise violence in our food system with false advertising,” said Hsiung. “We call that humane-washing. Whole Foods GAP program is an elaborate scheme to deceive consumers about the horrendous animal cruelty in the food system. Whole Foods promotes the image of an idyllic farm with green pastures when, in fact, birds are raised in cramped, filthy sheds and thousands of them are dying or dead. Americans care about animals, but that compassion is being twisted to serve an engine of violence.” 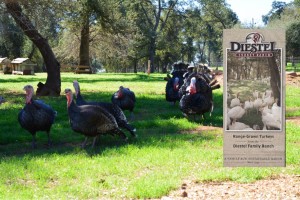 Behind the ‘humanely raised’ label

But with no federal definitions or standards for the terms “humane” or “sustainably raised,” there’s a huge disconnect. Though the USDA is legally bound to ensure accuracy in food labeling, the Food and Safety Inspection Service (FSIS) approves the use of animal welfare labels including Diestel’s with no supporting evidence.

According to the USDA, Diestel Turkey Ranch gained approval to use the phrase “Humanely Raised” based on a two-sentence statement submitted by the company’s Quality Assurance Manager.

For 20 out of 25 claims made by 19 companies, the USDA could find no supporting evidence at all for humane claims, something that raised serious concern with senators Dianne Feinstein and Cory Booker, who wrote a letter complaining about the misrepresentation to Secretary of Agriculture Tom Vilsack dated January 7, 2014. Feinstein and Booker wrote:

“We strongly urge you to direct FSIS to update its labeling policy to ensure animal welfare claims are accurate. The accuracy of animal-welfare claims should be verified through substantial, direct evidence by the agency or an independent third party animal welfare auditing system. …”

‘The cruelty we found is inherent to animal agriculture’

DxE’s investigation of Diestel found that its Jamestown farm is not unique. Two other investigations, by DxE (in 2014) and PETA (in 2015), found that Whole Foods suppliers were also not raising chickens and pigs humanely. These investigations turned up gruesome footage of animal abuse just as those conducted at industrial mega-farms all over the U.S. do.

Diestel’s bait-and switch was an elaborate scheme to deceive consumers about the horrific conditions at one of Whole Foods Market’s most trusted suppliers, DxE’s report claims.

“This farm was the best of the best — literally in the top 0.1%,” said Hsiung. “So if this farm is cruel, what does that say about the rest of the industry?”

Michael Goldberg is a former Rolling Stone Senior Writer. He is an animal rights activist and a member of DxE. His first novel, True Love Scars, was published in 2014; his second, The Flowers Lied, will be published in February.

4 Comments on There’s Nothing Humane About Whole Foods Turkey